Some Reflections on Halloween. Sort of.

Some Reflections on Halloween. Sort of.

I’ve never been into the whole Halloween thing. As a kid my parents kind of sheltered us from it because they were worried about the whole occult side of it: It’s traditionally All Hallow’s Eve: the only night of the year when evil spirits are allowed to wander around and cause trouble and hex people and ask strangers for candy before the saints all come back home on All Hallow’s Day -  or All Saints Day as we call it now, which has more to do with the Church Liturgical Calendar than with the Channel Seven hospital drama, which admittedly was also pretty scary.

And then when I’d grown up a bit my parents realised that actually in suburban Wanguri, wandering Satanists probably posed less of a threat than rampant commercialism fostering a sense of entitlement to festive candy, and were probably less evil to go with it. At about this point I sheltered myself from it because, enthusiastic fifteen year old patriot that I was, I was staunch in my determination to resist all things American. The fact that All Hallow’s Eve is a Christianised Celtic festival, was of course irrelevant.

Now if I told fifteen year old me that one day he would marry an American girl, he would probably have tried to kick my arse. And he would have failed. I mean seriously -  imagine me fifteen years younger, scrawnier and an idiot. Shouldn’t be too hard.

Nowadays my American wife gets very frustrated with Halloween in Australia, because apparently we do it wrong. I suspect the Yanks also do it quite differently to the ancient Celts who started it all, but whatever. The very fact that we’re doing a Halloween comedy gig on the sixth of November instead of the 31st of October is sacrilege in her book, to say nothing of the fact that we buy our pumpkins from the supermarket instead of picking them from the pumpkin patch. I’m not sure how your pumpkin patch is doing in the build-up this year, but apparently that’s something else we get wrong because Halloween is supposed to be in Autumn, or Fall as it’s called in Ancient Celtic. We’re already in enough trouble for postponing the gig by a week, so I don’t know what would happen if we tried to do it in April. Maybe we could swap Halloween with Easter. I’m sure that would go down well. 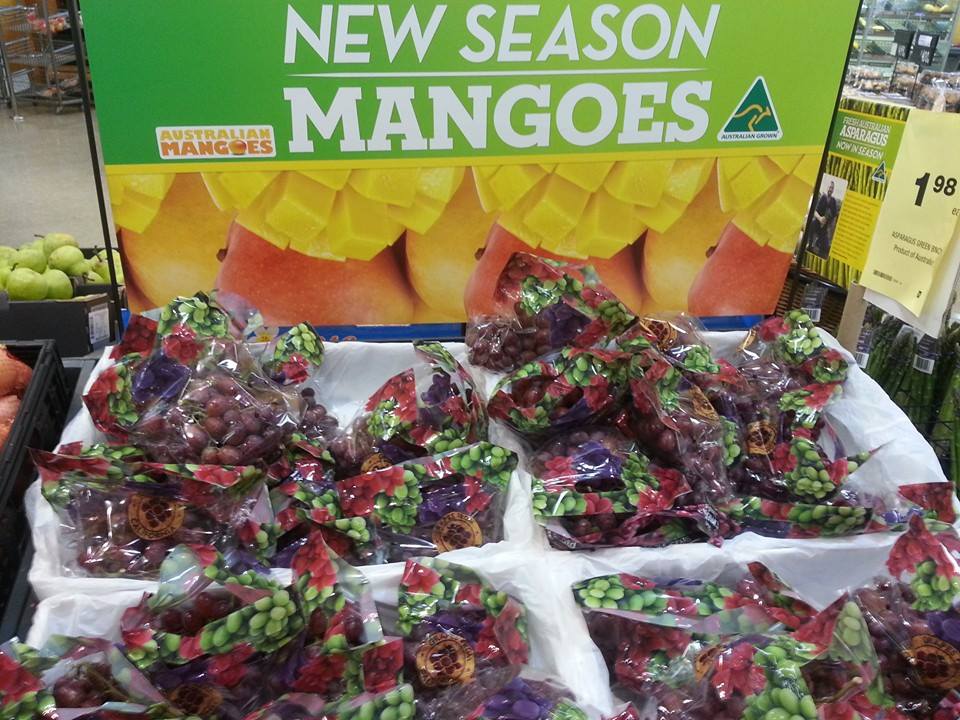 Woolworth's had actually sold out of pumpkins when I went to get this pic. I figured this informative picture of mangoes would do in a pinch.

Kim’s biggest objection was with the costumes. Apparently here in Australia we have the idea that Halloween costumes are supposed to be on a horror or gothic theme. Apparently this is incorrect. In America it’s not an opportunity to dress up scary. It’s an opportunity to dress up sexy. At this point I decided to stop arguing with her and just let her go with it. I’m culturally sensitive like that. Any other day of the year, criticising someone’s outfit for being too conservative would not go down very well, and would prompt an angry response of at least four and a half pages from my sister. Apparently Halloween is different. I blame the Celts. Fascists

It’s funny how dress expectations work, isn’t it? They say women have a hard time with being judged by their appearance, but I think it applies to men too, albeit less overtly. We have it with the polarity reversed. As a man, if you want to get good service and be taken seriously when you walk into a shop, you’ve got to walk in with all your buttons done up. For Pete’s sake don’t go in there with your t-shirt and shorts, or they’ll figure out you’re an unemployed stand-up comedian before you’ve even reached the service desk. And it’s impossible to get your phone bill discrepancy sorted out while the sales assistant is waiting impatiently for the punch line.

I had a problem with my phone company the other day, so I did up all my buttons and fronted up to the office to sort it out. It had absolutely no effect. The staff were all in polo shirts and told me I had to ring up the hot line to get them to sort out the problem. However, I did get asked for the number of the Palmerston store by another customer who assumed I was some sort of store manager, just because I had all my buttons done up. Sexist.

The worst ones for this sort of thing are those fancy department stores they have down south. You know the ones with the fancy perfume counters all at the entrance that you have to walk though before you can find the lego section upstairs somewhere. And you can tell they’re super fancy because on one poster there’s a picture of a pegasus striding rampant through a waterfall, while on the other there’s a close-up of Britney Spears’ face. Way too classy for me. I tried to get my mum some perfume for a Christmas present once and let me tell you, if you walk in there in a T shirt and shorts and they don’t offer you free samples of anything. They just glare at you like out-of-control detention monitors, and you can almost hear them thinking “Oh here’s another one of these young things come along. Do you even have a sense of smell? You’re not from South Australia at all, are you?” I learned my lesson, and went back the next day, with all my buttons done up and with a suit on just for extra self-righteousness.So with my fancy suit on and all my buttons done up, I went in and stood right between the big posters and just looked vaguely bored. Before you knew it; all the sales people were all leaning forward thinking “Ah, here’s a fellow who clearly knows his way around a ladies’ fragrance department.” And I just stood there, made eye-contact with a couple of them, flipped them the bird and walked out again, because it turned out you could buy the same perfume in K-mart for twenty bucks less.

They called security. Make of that what you will.