A lot different things come to mind when people consider Kim and me as a partnership. Everything from “well, that was probably inevitable,” to “What the hell was she thinking?” I’m not sure how many would think to themselves, “that’s the sort of couple other Christian couples should strive to be like.” Probably none. And just as well.

But as crazy as that sounds, they’ve got nothing on the people out there thinking “Garry and Kim are the couple that other Christian couples should want to look like.” I mean, don’t get me wrong: my wife is hot. But even on our most glamourous days, surely no-one would be looking at us and thinking, “I wish we could look just like them.”

So imagine our surprise when a friend sent us this screenshot from his Facebook newsfeed: 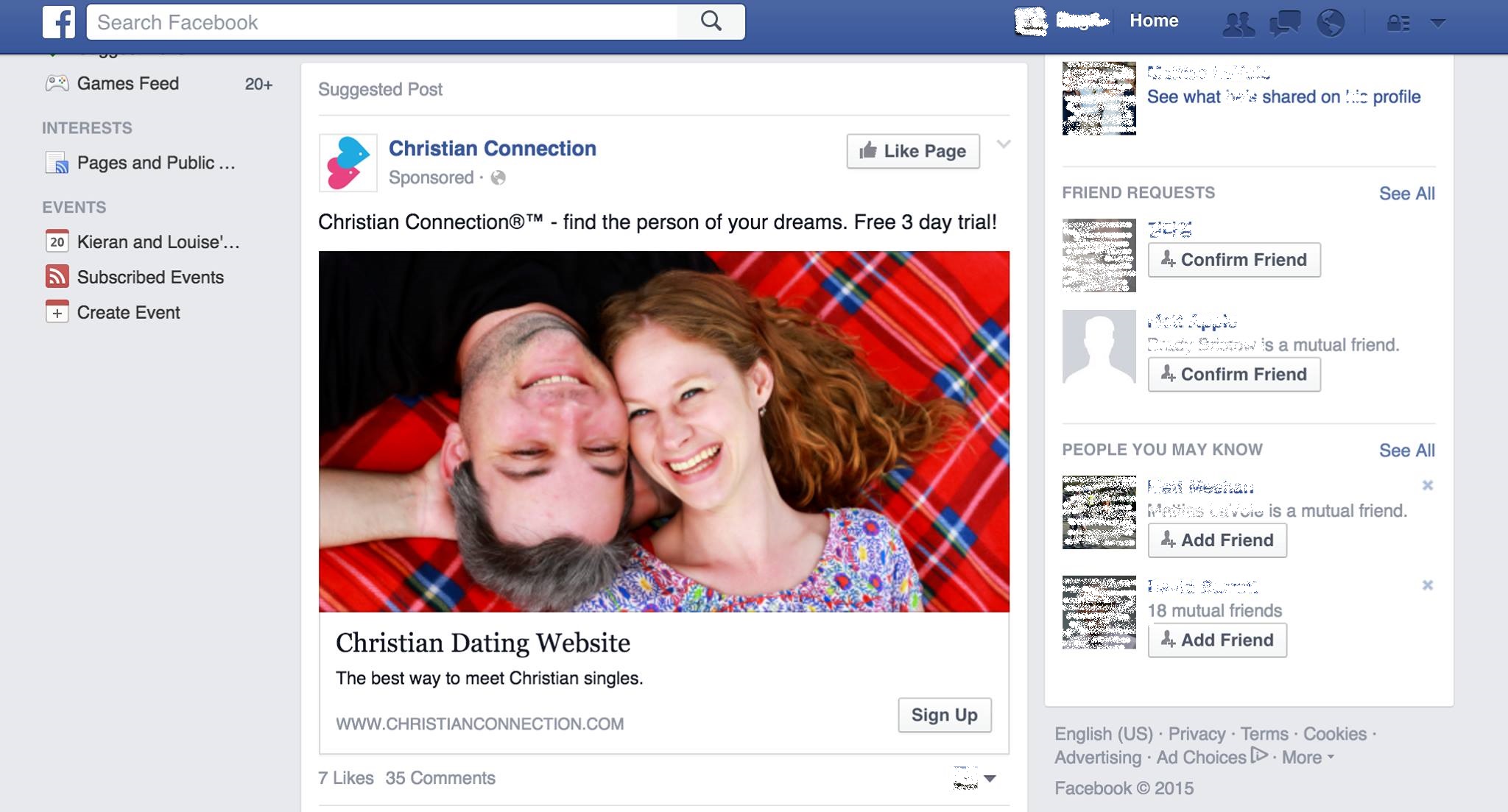 The photo is one from our engagement photo-shoot that our awesome friend Nick Williamson did for us in Sydney. Kim’s first question, was of course, “How did Christian Connection get this photo?” Meanwhile my first response was “I wonder how much money we can get in payment for using our photo without permission?” We have no association whatsoever with these people, and didn’t meet online.

Well, the answer to the second question is “none,” because the answer to the first question is that we signed an agreement with Nick to let him use the photos as stock images for his business. Christian Connection have evidently bought it and used it, quite legitimately in their Facebook advertising campaign, which then picked my friend out as someone who might want to use their services.

Poor guy. I mean it’s hard enough having Facebook identify you as Christian and single and therefore obviously in need of Christian online dating services, but to have that ad backed up with your apparently happy, married and thus evidently better Christian friends is going a bit far. I’m sure it’s just a coincidence.

Meanwhile… having now solved the mystery of how Christian Connection came have our photo, it’s now time to consider the bigger question:

Well there’s really only one explanation: we really are the model Christian couple.

We’ve had a lot of people approach us since the image went viral, most of them asking about how we balance the pressures of fame with normal life, whilst managing to keep on being really, really ridiculously good looking. It’s a struggle, to be sure. But our advice to younger, less attractive couples is always this: stay true to yourself. If you can draw it, you can believe it; if you can believe it, you can achieve it, but if you can’t draw, you’re stuffed.

A short point about image alteration: A lot of people have expressed concern about our images being photoshopped, suggesting that it places pressure on other couples to aspire to an unrealistic standard of Christian Couple… -ness. As far as I’m aware, no alterations were made to this image, apart from colour and light filters. We did, however, make significant alterations to reality itself before taking the photo, removing some fallen leaves from the area and adding extra smug. A lot of people don’t realise this, but that picnic rug isn’t even ours. We don’t even own a picnic rug! It’s all just part of the magic of the Christian couple modelling industry. No, not industry. Family.

So remember, kids; if you’re looking for that special someone in your life, make sure you view Christian online dating services with the suspicion they deserve, and do what we did: meet in person at a church, spend five years doing your level best not to get together, then give up and get married.

Then you too, can have a marriage as commercially attractive as ours.