The first time I heard the Jesus Christ Superstar soundtrack, I was 10 years old and about half way through primary school. My mum bought the highlights album from the Australian cast recording, with John Farnham as Jesus, John Stevens as Judas and Kate Ceberano as Mary Magdalene. I must have listened to it hundreds of times, and spent hours trying to hit those high notes the way Johnny did. My voice hadn't broken yet and and I still couldn't reach them.

In fairly short order my parents bought me the piano music and within a week I had the score learned backwards and forwards, which made a nice change from Cats for a while. The only thing missing was a score for the overture, which was just a little too hard to learn by ear, Lloyd Weber being the maniac that he is.

It was one of the soundtracks to my teenage years. I’ve listened to all sorts of crazy things since, but Jesus Christ Superstar has always been on a playlist somewhere.

Before we were married I took Kim to watch the more recent arena production with Tim Minchin and Ben Forster. For me it was great hearing all those familiar songs being reinterpreted, while Kim was hearing it all for the first time.

Last year, just before I left Darwin, the Darwin Chorale was preparing to put on a concert production. I enjoyed auditioning for it and was disappointed when I had to pull out to move to Brisbane.

So imagine how excited I was to find a company about to hold auditions for the very same show right here in Brisbane. I signed up for auditions quick smart and -  to cut a long story about months of rehearsals, a week or so of still trying unsuccessfully to hit those notes like Johnny, a crazy amount of fund-raising and a slightly intimidating amount of choreography short... 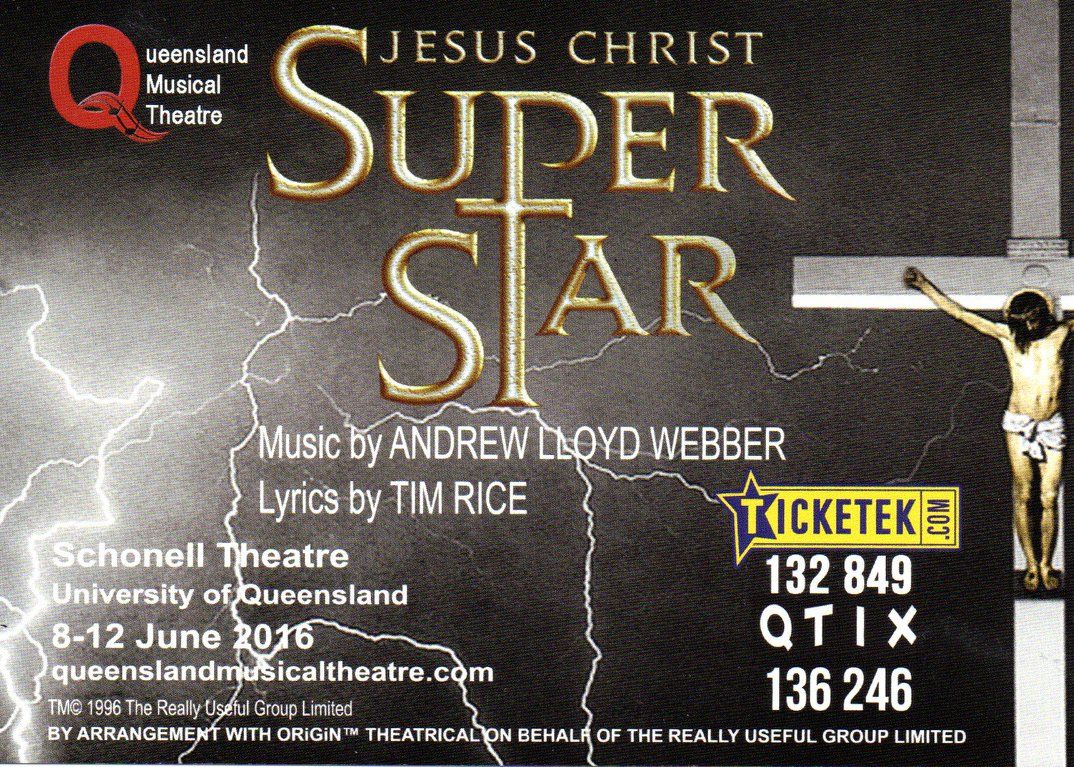 It's the story of a young, down on his luck tax collector named Matthew who signs up with a travelling band of itinerant preachers for the chance to travel, laugh at the Pharisees and solve crimes. Along the way, he joins a city parade, gets beset by lepers and at some point the long-awaited saviour of the world gets crucified.

Well... that's the basic idea from my perspective. Others might find other aspects of the story more significant or engaging. Whatever.

The point is, I finally got my hands on sheet music for the overture. Oh yes.

There are still some tickets available. I think. Come and check us out!